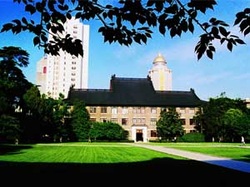 In addition to the excellence in teaching and research work, NJU is also known for its vigorous exchanges with the outside world. Starting from 1979, it has established academic links with more than 200 universities and research institutes in around 70 countries, and hosted over 120 international conferences. There are over 1,800 international scholars who have taught or lectured and more than 18,000 international students who studied on NJU campus. NJU never ceased its efforts to explore possible modes of cooperation and to learn from international experiences in teaching, researching and management. Such efforts resulted in the founding of the Center for Chinese and American Studies (with the Johns Hopkins University, US), the Sino-German Institute for Law Studies (with Gottingen University, Germany), and the Lab of Multi-Media Distance Teaching System (with the Japanese Ministry of Tele-Communication). Regarded as "an overseas campus on the Chinese land," the Center for Chinese and American Studies has become a successful example of educational cooperation between China and the United States, and received much attention and acclamation from governments of both countries.